A nice Thursday in Downtown Denver and a long elapse since my last review.  Time to head down to Civic Center Park for the EATS food truck gathering.  A large selection of trucks, but I headed for the Chef Driven.  I’ve not had anything from this truck in over a year, so it was overdue to check back in.

The truck was parked down at the south end of the EATS area, which afforded its canopy a bit of shade.  The truck had also set out a nice mat to stand on, which was strangely comfortable to wait around on. 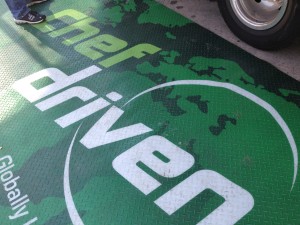 Studied the menu for a bit.  This truck offers “globally inspired” sandwiches, which includes the Mexican, Cuban, Korean, Thai, Vietnamese, and Italian.  Based on somewhat random impulse, I went with the Vietnamese.  The purveyor of the truck told me it was a good choice.  I ordered a Diet Coke, and he handed me a bag of Cape Cod brand waffled chips.  The sandwiches run $9, and the drink another $1 for a $10 downtown Denver lunch.

The menu for this truck is displayed on an LCD television which is encapsulated in the side of truck.  It is hard to see from a distance due to reflections, but is nice touch to the truck up close.  The truck might do well to maintain this hi-tech sign, as well as a folding sign out front so that potential customers do not have to get up next to the truck to quickly scan its offerings.  The picture I took included an interesting reflection of the Denver City Hall building on the west side of Civic Center. 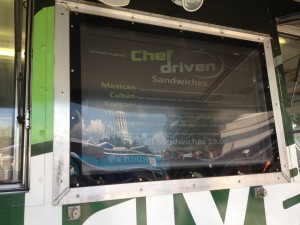 And a quick photo of the truck: 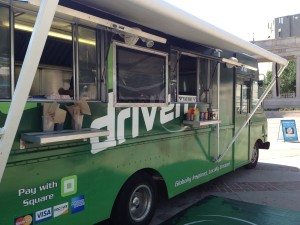 After a very reasonable wait time, my sandwich was delivered.

Here’s what it looked like prior to scarfing it down: 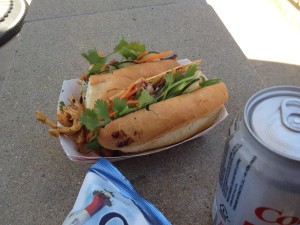 Average food truck presentation, which is fine for the park eating setting.  I found a spot under an umbrella and commenced eating.

I am not under the illusion that I know anything about Asian cuisine or spice.  When I cook, my go to ingredient is overwhelming green chile from New Mexico, which speaks for itself.  Notwithstanding my culinary limitations, this was a good sandwich. The menu itself lists Sweet Chili Chicken, Pickled Veggies, sriracha spread, and fresh cilantro.  The Veggies consisted of red onions, cucumber, and carrot slaw– very nice. 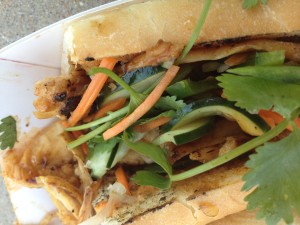 The chicken was great for a sandwich. I usually dread ordering chicken on sandwich, but in this instance, it was fantastic (to be honest).  Some of the chicken fell out as I was eating. But I am a messy eater, so not unexpected.  There was a good amount of meat on this.

The spice level was entry-moderate.  The spice was focused seemingly on a sauce spread onto the bread.  Speaking of the bread, it was fresh tasting, but otherwise an unremarkable sub roll.  It did not detract from the innards.

Overall I enjoyed this sandwich. As noted above, it came with a side of chips in the variety of the Cape Cod brand Waffle Cut Chips.   These do not seem, to me, to pair with this Asian type of sandwich.  I felt no desire to open the bag while I was eating the sandwich, and ending up trying the chips as an after-course.  Great chips – would eat again.  But they are not necessarily belonging alongside this particular sandwich. Seemed an odd pair.

The bottomline:  the Vietnamese from Chef Driven was a good lunch option at the EATS festival.  Nice service, and the sandwich fit easily into my stomach and was legitimately delicious.  The potato chips was an odd pairing.  In terms of value, at $9, this appears pricey.  In reality, it is within line with most food trucks and compares favorably.  As I’ve stated before, a $10 lunch downtown is at the low end for money spent, and you would not waste your money at Chef Driven for this one.

A view of the eats after I finished chowing: 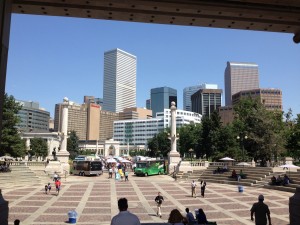